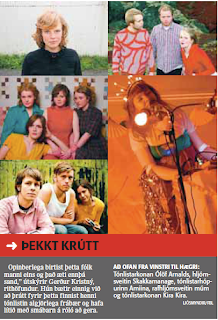 Those abroad who follow the Icelandic art scene may, in the last couple of years, have heard a strange word that crops up in discussion more and more often. It seems to apply in any number of contexts and is often spoken with a wry smile and a Björk-like wrinkling of the nose. It apparently describes a lot of the new Icelandic bands that visiting critics find so intriguing and a surprising variety of the younger artists as well. And if you call a baby ‘krútt’, you will make its mother proud.

Krútt is one of those words that defies translation but has nonetheless been used in Iceland to characterize a whole generation of creative young Icelanders. Krútt is ‘cute’, even ‘cuddly’, but also ‘clever’ and irresistibly attractive in a childlike way—precocious but still, perhaps, a bit naïve. The term certainly does not correspond directly with any particular international style or ideological formation; it is not employed in self-conscious emulation of art-historical terminology as were ‘expressionism’, ‘constructivism’, ‘abstract expressionism’ and ‘pop art’, which all became current in Iceland a decade or so after they had had their heyday on the continent or in the United States. It seems rather to be used in defiance of such labels and as a deliberate attempt to evade categorization, perhaps specifically to confound journalists and writers seeking a convenient label for what they feel is a particularly ‘Icelandic’ approach to art and music.

Another reason why Krútt is so hard to pin down is that it is not at all clear why a lot of the art so described should be considered cute or childishly innocent, as the word would imply it is. Think of Björk and Sigur Rós with their advanced tonal techniques and hyper-intellectual associations. Think of Gabríela Friðriksdóttir’s dark musings on mythological origins, gnomic earth spirits and the lurking dangers of the nursery. Think of the Icelandic Love Corporation’s performances with their sharp critique of the art-world division between consumers and providers, and of its roundabout reinforcement of conventional gender roles. Think of Ragnar Kjartansson sitting alone in his crumbling countryside dance hall, picking despondently at an out-of-tune guitar, a phantom in his own opera.

None of these artists and musicians would really appreciate being described as krútt, but they nonetheless lead the way in rejecting generational labels and second-hand catchwords to pursue their own individual and often highly eccentric styles. Perhaps this is not even such a heroic gesture as it may sound. Instead, it may be a case of Iceland’s isolation and small population working to foster, rather than stifle, artistic creativity. Mugison—Iceland’s latest and totally unclassifiable music sensation—explained it in a recent interview: “There’s no one around to show your stuff to except your mother and she always thinks you’re being very clever.”

‘Krútt’ now shows every sign of becoming another of those labels that progressive artists everywhere loathe; it is even being embraced as a style term, self-consciously mixing woolen socks and designer clothing. But you can be sure that few serious artists will accept such a fascicle definition. Even cute babies will bite when provoked. 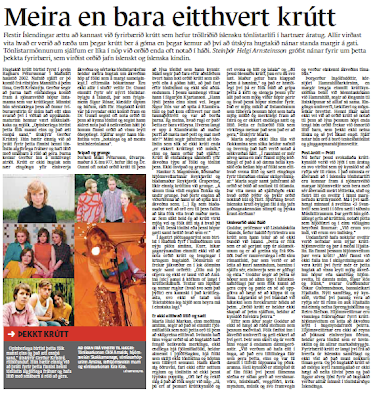 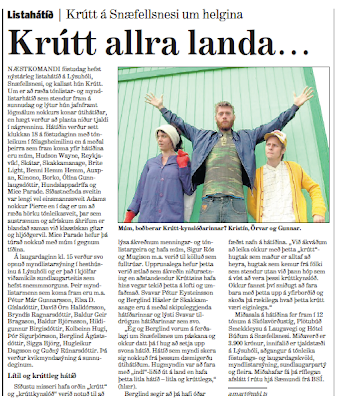